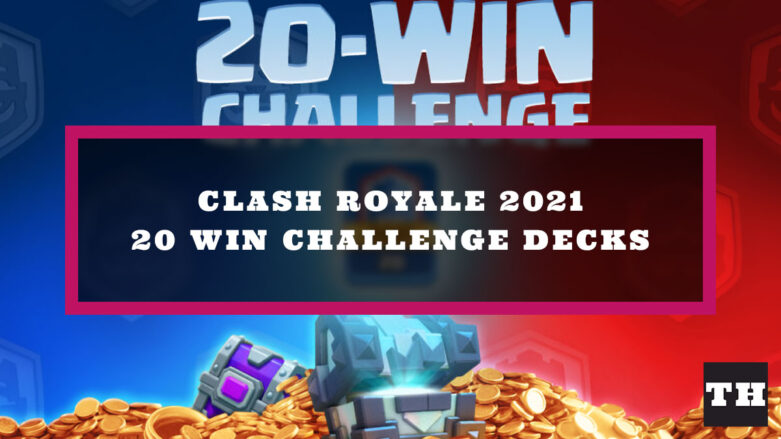 The Clash Royale 2021 20 Win Challenge is upon us and if you want some juicy rewards then you’re going to want to make sure you participate. This is a tough one, because if you lose three times then you’re out! However, you can reset the challenge and try it again, but you’ll have to make your way up through the wins again. If you aren’t much of a deck builder, we have some of the best decks for the challenge listed below.

This first batch of decks is what was recommended by Morten on YouTube, who is one of the best players in the game. We’ll have some more options available once the challenge is taking place and some stats have been released on what is performing the best.

LavaLoon is one of the most popular decks for the challenge and it has gotten 20 wins, with player Maxirus taking it all the way to the top. This deck includes Balloon, Fireball, Guards, Lava Hound, Mega Minion, Skeleton Dragons, Tombstone, and Zap.

Watch the deck in action in this video:

You can watch the deck in action with this video:

The player Fforte is the first person to get 20-wins in the challenge in 2021. They used a deck that includes Bowler, Electro Wizard, Freeze, Graveyard, Inferno Dragon, Lightning, Tornado, and Valkyrie. Now, using this deck isn’t going to guarantee you 20-wins, but at least you know it has reached the highest of highs in the event!

You can watch one of the games in action in this video:

This is Morten’s favorite deck in general, so if it looks like something you might enjoy then give it a try. This list includes Golden Knight, Mega Minion, Miner, Poison, Royal Delivery, Skeletons, Tesla, and The Log!

If you’re looking for a proven deck for the event, then give this Pekka Bridge Spam variant a try. You will need Bandit, Battle Ram, Electro Wizard, Fireball, Magic Archer, PEKKA, Royal Ghost, and Zap to run it.

Watch this deck get 10 wins in a row in the following video:

This is a popular deck list in the meta right now and it is getting plenty of players wins on the ladder. If you want to take it into this challenge, you will need Archer Queen, Dark Prince, Electric Giant, Goblin Cage, Lightning, Mother Witch, Skeletons, and Tornado!

Since there’s quite a few PEKKA decks on the ladder this version of Royal Hogs is a good counter for it. If you aren’t running into much PEKKA then you might want to try something else. To run this list you will need Barbarian Barrel, Fireball, Flying Machine, Goblin Cage, Golden Knight, Royal Hogs, Royal Recruits, and Zappies.

If you don’t have the largest card collection then you might be able to get away with this Royal Hogs and Archer Queen cycle deck. You will need to have Archer Queen, Earthquake, Fire Spirit, Goblin Cage, Royal Delivery, Royal Hogs, Skeletons, and The Log.

This is a bit of an aggressive deck, because of things like Fire Spirit and Hog Rider. You’ve got the Lightning to deal with Archer Queen decks. If you want to run this list, you will need Fire Spirit, Firecracker, Hog Rider, Lightning, Skeletons, Tesla, The Log, and Valkyrie.

You can see some of these decks in action via this video from Morten:

Those are all of the best decks for the 2021 20 Win Challenge in Clash Royale! We’ll try to add some additional decks as the event goes longer and people figure out what works even better!