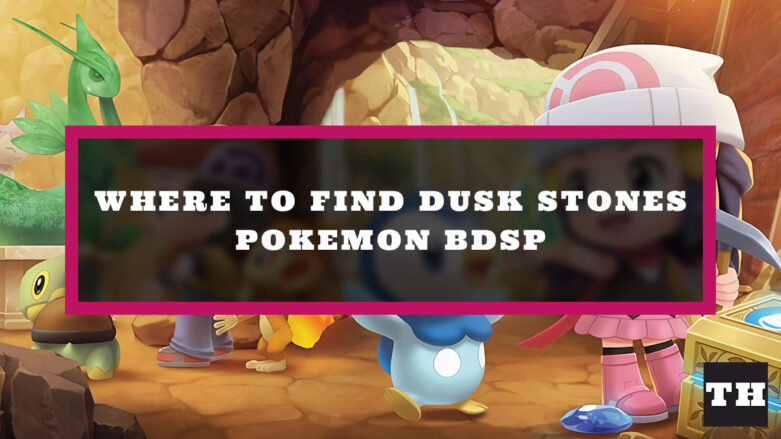 Pokemon Brilliant Diamond and Shining Pearl (BDSP) are now available for the Nintendo Switch, and with their release comes a variety of interesting challenges and questions for players. While the games are fairly straight-forward, some of the new mechanics and fun aspects of them can be a bit tricky! If you are looking for the Dusk Stone in this set of games, we’ll show you how to get them so that you can evolve some Pokemon!

To get a Dusk Stone in Pokemon Brilliant Diamond and Shining Pearl (BDSP) you will either need to head to Veilstone City or the Victory Road cave to find them as floor loot. You can also use the Pokemon Pachirisu, which can have the Pickup ability, and will occasionally steal them from other Pokemon.

Dusk Stone is an evolution item that can be used on the following Pokemon to evolve them:

One method that you can use to get a Dusk Stone is to catch a Pachirisu at the Valley Windworks area of the game. You will need one that has the Pickup ability, which does the following:

The Pokemon may pick up the item an opposing Pokemon used during a battle. It may pick up items outside of battle, too.

Once you get one, raise the Parchirisu’s level to 11 (required to get a chance at one of the evolution stones) and then fight trainers. Make sure to check the Pokemon after each battle to see if it has obtained an item. If it has one, make sure to remove it so it can grab another one in the next fight. Keep this up until you’ve got the Dusk Stone you are trying to get!

A couple of tips for this is that you can use a Budew that has the Worry Seed move on it when you encounter a Pachirisu to show what ability is on it. This way you don’t have to waste time catching a Pachirisu that doesn’t have Pickup.

If you really want to gather up some items, you should consider getting multiple Pachirisu and having them in your party so you have multiple chances to get what you want.

This method will also grab things like Shiny Stones and Dawn Stones, so you can evolve additional Pokemon if you want.

If you are already pretty far in the game and don’t want to bother using a Pachirisu then you can find them as ground items that you can pick up yourself. You will need to have at least 7 badges or be in the post-game content to get these ones.

The first one can be found in Veilstone City and inside of the Galactic Warehouse. Make sure to head over to the Galactic HQ where you will find a Galactic Grunt. Talk to them and they will give you the Storage Key. Afterwards, go into the warehouse and use the Storage Key to open up the doors, which will open up a room with a Dusk Stone inside of it.

Another Dusk Stone can be obtained by heading to the Pokemon League travel point. You will need to have the National Dex, or you won’t be able to get this one. Once you arrive at the fast travel location go down the waterfall, and head to the right into the Victory Road cave.

Once inside the cave, go down and reach the area where you can Rock Climb. Make your way down the wall, go left, and then immediately up the path. You should run under the bridge and then go left around the NPC, and then go down after them to go up the stairs. Cross the bridge, follow the path, and then go through the cave door.

Go down the stairs to the right then go up and take a right down those stairs and into the next cave door.

Keep going up and you will find more rocks that you can move. Push the first one up two times and then once to the right. There’s now one more rock to move which is the top one. Move it up twice and then go to the right to finally have access to the Dusk Stone.

If you messed up on the rock pushing puzzles, just go out of this room the way you came. This will reset all of the rocks back to where they were, so that you can try again.

If at any point you got lost in these steps, you can check out the following video:

That’s everything you need to know about finding the Dusk Stone in Pokemon Brilliant Diamond and Shining Pearl! If you want to learn more about the games, be sure to check out the Pokemon section of our website.