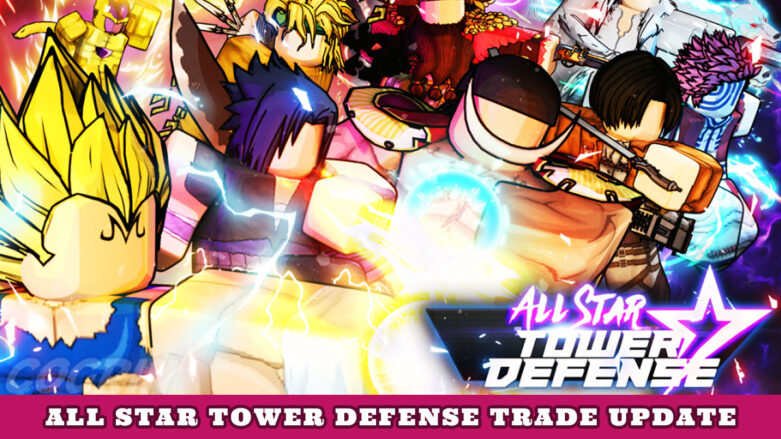 Roblox All Star Tower Defense is receiving another big update, and this time it will bring a limited trading system into the game. While there are quite a few requirements for trade, this will be a nice feature that will give players a chance to get some of the towers they’ve always wanted. You will also now get a unit blessing, which will happen when you place certain units on your shoulder. Dungeons is another big addition to the game, and they will reward you with one of two available units if you can complete one. There’s a whole lot more in this patch, so be sure to check out the update log below!

Get free in-game rewards by checking out our All Star Tower Defense Codes page!

How do I enable trading?

You can turn on Trading Mode in the settings menu.

What Units are tradeable?

Units that are tradeable are only those that are limited!

Infinite Mode Leaderboard Rewards, Event Prizes, Dungeon Units, Contents of Capsules as well as the Video of the Week and Developer Units!

Tradable Units have a ‘T’ Displayed in the corner of their slot in your inventory.

What are the requirements for trading?

Level 40 is the required level for trading!

Limited Units are considerably weaker then banner Units, these tradeable units are not to advance and aid in progression but rather to enhance your character, thus trading with newer players will not make the game easier for them. Due to the rarity and stock of Limited units ; trading will not cause them to be less rare then before as they will always exist a set amount of them.

Can’t I make a 2nd account and give myself stuff?

We have added a new feature to limited units of certain rarity!

When Equipping Select units on your shoulder they will now grant your character something Unique!

Every few hours a Treasure Cart Contracts will appear in certain story mode missions, the locations and appearance time are different for each player. When joining the game you will get a notification signaling that a treasure cart mission is available. When scrolling through the story mission list you can find a distinct treasure cart symbol that lets you know which story level the cart has appeared in. Watch out though these carts are valuable and you may come across some new magic that will mix up your units. You’ll often find

You can purchase Capsules with Robux or get them from events such as Treasure Carts. Capsules contain only tradable units which are decent in battle but cool to use as a companion. Capsule units that are of Rarity epic and higher grant blessings.

Through accessing your inventory you may open capsules as well as exchange capsule rewards for a Capsule [+] a capsule that has a greater chance of giving a Rare Reward.

Every few months capsules gets replaced with a new type that contains new rewards, leaving the old capsules to never be obtainable again!

At the start of every Weekend [Friday/Saturday] a Dungeon will emerge in the Lobby, this takes place twice every weekend at a random time on the hour [The times will be respective to one favoring eastern time zones and the other european time zones]. Conquering Dungeons will grant you one of two units which depending on if its the first or second dungeon the select day . The two units will be similar but they will be variants of each other. These Dungeon Entrances can appear as timed [They only appear for a certain amount of time] or Stock [Only a certain amount of teams gamewide can be teleported inside the dungeon]. These units are always tradeable and have a shoulder aesthetic which differs between both variants. Once the dungeon goes away that Unit will never be obtainable again through any other dungeons, however variants of that Unit may appear again!

Players who have not progressed past Chimera Ant Story Arc will have a different banner from those who have. The contents of that banner contains units that are balanced better for earlier progression [5 Star examples: Ace, Zenitsu, Tanjiro, Whitebeard]. Players who have unlocked the second banner can swap between the two. It’s important to note that the 5 star contents of Banner 1 will never be summonable on Banner 2, thus giving more variety.

You don’t have to auto click anymore to not disconnect

That’s everything we know about the new update in Roblox All Star Tower Defense. Be sure to check out the ASTD section of our site for more details on the game.