The Fortnite Shanta Skin is part of the The Lotus Walker set and was released on December 05, 2021 during Chapter 3, Season 1. To get the Shanta, you will have had to have played the game when the Battle Pass was available. The skin could be unlocked at Tier 0 during Chapter 3 Season 1.

Here's a list of all of the currently known styles for the Shanta Skin! 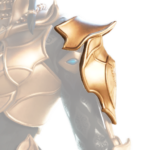 You can use the Shanta Skin PNG for your own digital art projects! They have a transparent background, which makes them easier to manipulate. Click on the image to enlarge.

The Shanta Skin is part of the The Lotus Walker set! Other items in the set are included below.