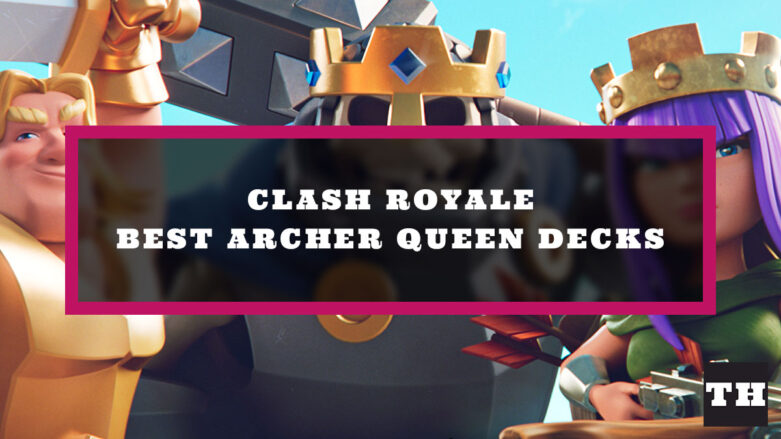 Clash Royale has added the new card rarity known as Champions. These are cards that you can unlock once you arrive at King Level 14. There are three in total right now, with likely to be added in the future. We will show you some of the best decks you will find Archer Queen in for Clash Royale in this post.

If you aren’t familiar with Champions, they start at level 11 when you unlock them and can be upgraded like any other card. They have a unique ability that can be used when they are on the field, which will cost you Elixir. This ability does have a cooldown, so make sure to use it wisely! You can only have one Champion in your deck, and you can only have one deployed on the field at any time.

The Archer Queen is pretty powerful due to its ability, which makes the character go invisible and increases their attack speed and power. If you can get her close enough to a tower, she can almost solo it due to the massive damage output she can throw out when you use her ability!

Keep in mind that these decks are early in the meta, so more research will need to be done before the actual best lists end up being found out and refined!

This deck list includes Bandit, Barbarian Barrel, Electro Spirit, Lightning, Mega Knight, Ram Rider, and Royal Ghost! Bandit is good for charging in on smaller units with its dash, and you have a variety of options that will defend and attack against all other cards.

Here’s Morten playing this list in the top ranks:

This Archer Queen decks takes advantage of the Royal Hogs and also includes Cannon Cart, Fireball, Goblin Cage, Mother Witch, Skeletons, and The Log! Skeletons are good for taking aggro off of your Archer Queen and Cannon Cart. The Goblin Cage is a good option for blocking off a bridge so you can delay a push!

You can watch this deck in action via this video from Morten:

This Archer Queen deck features Electro Spirit, Fisherman, Lightning, Royal Ghost, Royal Giant, Skeletons, and The Log. Royal Giant decks are pretty well-known as powerful lists that are a force to be reckoned with.

This version of an Archer Queen deck features Fireball, Ice Spirit, Knight, Skeletons, Tesla, The Log, and the X-Bow. The deck is mostly looking to either protect the X-Bow so that it can take down a tower, or for you to get the Archer Queen in close enough so that she can damage down one. You can use The Log and Fireball to protect your X-Bow, and let it go to town on a tower!

You can watch this deck in action in the following video:

The Archer Queen Clone deck features Baby Dragon, Bats, Clone, Fireball, Lava Hound, Lumberjack, and Skeleton Army. This is a variant on an already popular deck that uses pretty much all of the same cards, just swaps in Archer Queen for Flying Machine, since she can cover flying enemies. This is a fairly simple deck, just get your various minions across into enemy territory, throw a clone potion on them, and then watch as they terrorize your opponent!

Those are all of the best decks for the Archer Queen Champion in Clash Royale! We have more coverage of the game in the Clash Royale section of our website, so be sure to check it out.