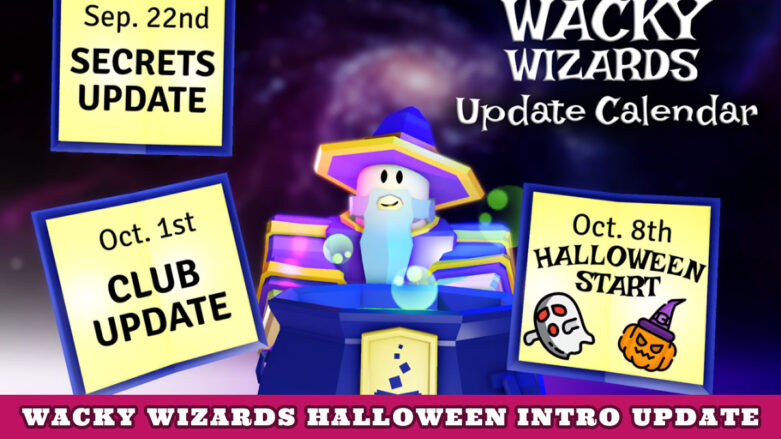 Roblox Wacky Wizards delivers a new update each week, which is now known as Wacky Weekends! The patch will sometimes bring us a new ingredient, and just about always give us some new potions to brew. We will have all of the information you could want about this week’s that is set to be the Spooky Update in this post!

The Spooky Update was released on October 8th, 2021. This release brings the Halloween event into the game, where you can collect Candy to redeem for various items. One of those is the new Pumpkin ingredient which can be purchase for 1,800 Candy! You can find out where to get it in our how to get candy guide.

There’s a variety of items you can get with Candy in the game. Here’s a list of what you can get:

The Trick or Treat part of the game has you making potions that will scare some of the NPCs in the game. There’s a board behind the Headed HorseMan with the name of an NPC and the required potion you need to scare them. They are pretty obvious what will work, it usually translates to the ingredient name. You need to bring the potion over to the NPC and drink it in front of them to get the reward!

Each time you scare an NPC you will get 20+ Candy. This will refresh each day and give you more NPCs to scare! Doing this each day will get you quite a bit of candy.

During the event the Potion Trader will appear randomly in the game. He will have potions listed on a board near him for you to bring to him to get Candy. You will get 10 for each potion you complete. It appears that premium potions can be apart of this, at least they were for me. The Potion Trader will spawn every 30 minutes with new potions to create. That means you can get 30 Candy from this method each time he visits.

When he spawns he will be in front of the sign that announces when the next Cyclops event will arrive! The potions will be different each time that he shows up!

Here’s a list of all of the new potions:

The Disco Club Update was last week’s release and added some new flair to the Cave Club. The ingredient you can get via a quest is the Disco Ball. You can find out what to do in our how to get the Disco Ball Guide!

A new premium ingredient known as the Superhero Cape was made available for 2,100 Gems!

Here’s a list of all of the new potions:

That’s everything we currently know about this update that was released for Wacky Wizards! We will be covering all aspects of this new addition to the game, so be sure to check out the Wacky Wizards section of our website.